The Jabulani Women’s group consists of 30 members, the majority being mothers of students at Jabulani Primary School and all members of the extended Jabulani community.

The group meet weekly to share ideas and work together to assist the school but they are very keen to learn ways to improve their income and be able to pay their school fees. The group participated in a week long workshop – Home Finance and Small Business Development together with a sewing course.  Many of the women are accomplished at sewing but are unable to afford the equipment and materials required to do any of this.

We provided 6 Singer Hand Sewing Machines, Crocheting hooks, knitting needles, and sewing and knitting start up kits for the group to get going on a small income generating project.  They will initially make uniforms for the students at both schools in the area – Jabulani Primary and Senior as these are bought at great expense from the nearest town, Bulawayo.  There are plans to make table cloths and napkins to supply  5 small lodges in the Victoria Falls area, all of whom have pledged their support, and to extend this later on to the many others in the Zambezi National Park.   The group have given their commitment to pay their children’s school fees once they start earning an income.

Grand Circle Foundation also funded a solar powered borehole in a more centralized part of the community to relieve the water challenges. Distances walked are now reduced and it is easier to water livestock as the new borehole is solar pumped. The Jabulani Village borehole services 250 plus homesteads with each homestead having +/- 8people.

The original borehole was sunk in the early 1940s and over time it became highly unreliable. It is situated by the shops close to the Victoria Falls to Bulawayo highway. Because of its proximity to the highway, the borehole is used by passersby during the day and in the night. When the borehole broke down the community struggled to get it fixed as the spare parts were difficult to find and  expensive.

And most recently, in partnership with Children in the Wilderness, several recycling and income producing projects were successfully implemented.

Close to Jabulani village and considered an offshoot of it is Lupinyu village with 320 people.  To save the families (namely the women) the hours long journey every day to get water from the Jabulani borehole, we recently funded the digging of a new borehole in this community.

This community had been desperate for a borehole in this location for several years, and are overjoyed that their dream has come to fruition. When the news was given, they immediately got together and began clearing the road to the potential site so that the drilling rig could get through. Drilling was completed within a couple of days as a good source was found and the yield was extremely favorable. The pump and solar array with panels, a tank, and a cattle trough was then installed, and is now complete.

Having a borehole and access to water has countless direct and indirect impacts for those with access. In addition to providing a close source of water to collect each day and saving much time and energy walking to other source, much time is freed up to do other household chores, or income-generating activities.  Animals and plants are also catered for, and growing and maintaining a vegetable garden becomes much easier, with better yields for harvest. 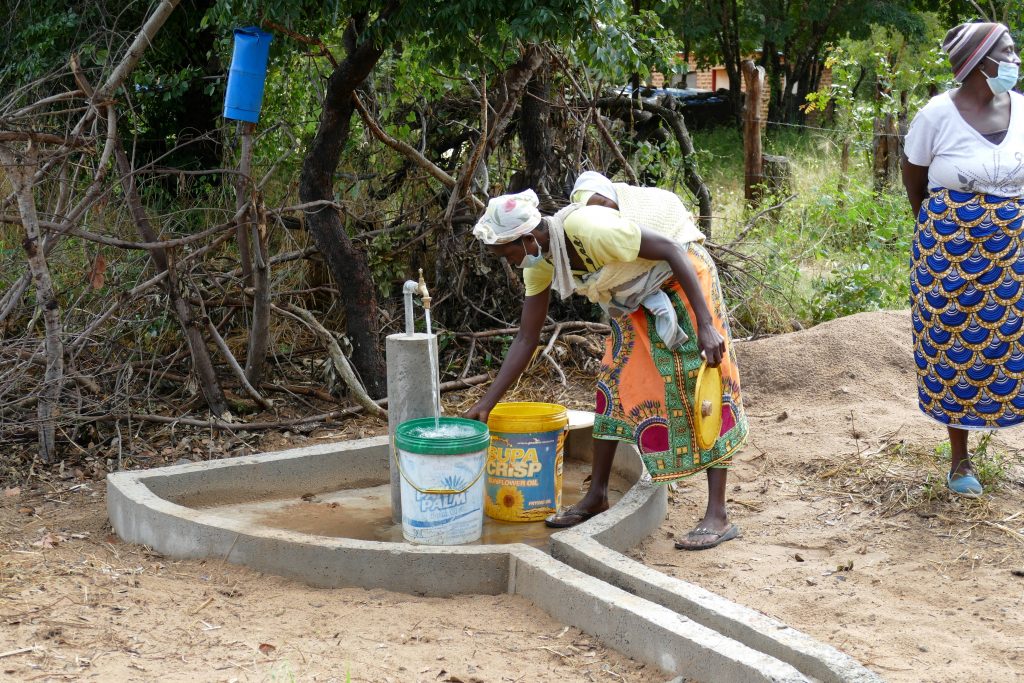